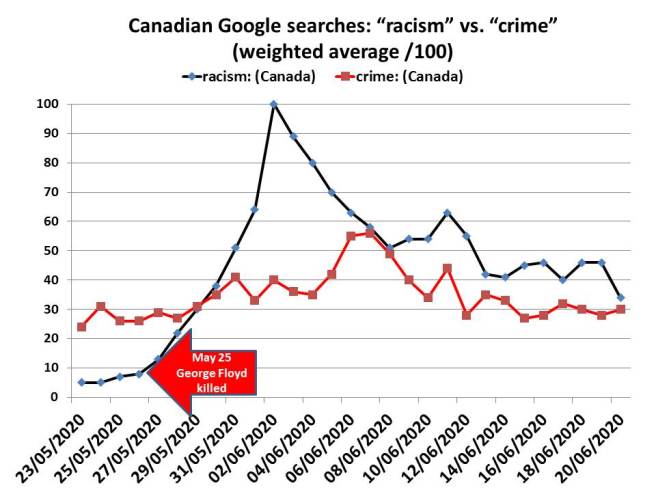 The widescale protests about racism and defunding police has barely put a dent in overall trust in police in Canada. That’s because concern about crime was a much bigger deal than racism, treatment of minorities, and police funding. But things are changing.

Many thought that public trust in Canadian police (it’s way lower in the U.S.) basically cratered since May 25, 2020 when George Floyd was callously killed by a Minneapolis police officer who has given a whole new ugly meaning to “take a knee.” That incident ignited global protests against police, racism, and associated misdeeds throughout history.

So what’s going on here? How can we Canadians possibly trust police as continually rotating news cycles present legions of protesters pouring through streets criticizing police and we keep seeing cops doing dumb things like pulling a prone, emotionally disturbed older woman across the floor by her hair?

The answer to this cognitive dissonance is found by analyzing two things: What people say when they are surveyed versus what information they search for on Google. Sometimes people might lie on a poll, agreeing to something just to fit into what they think is the norm despite it being an anonymous survey. But searching Google is a voluntary thing. No pressure of conforming. A Google search is a private hunt for information about what the person thinks is important, not what is being asked of them.

Data from the Leger public opinion survey: What people were asked

My analysis of various sets of data from the Google Trends search engine tells us the following about the interconnectivity of Canadians and policing issues.

Where it’s all headed

Sifting through the public opinion polling by Leger and others and especially analyzing Google search patterns provides a number of simmering issues.

Yes, overall trust in Canadian police appears to have slid only somewhat considering the explosive events and ongoing protests. But when we dig deeper into the details we discover the devilish issues that are keeping the flame burning.