There is a growing fear and loathing in America that suggests a national revolution, at least in thought, is well underway. The worry for us watching across the border is that the need for long-overdue change in social structures and systems is being resisted by fear, anger, and the American predilection to “buy a gun.” I worry that we in Canada are vulnerable to the contagion of violence south of the border.

When I applied the Google Trends research site to see how many Americans were doing a search with the words “I am angry” from June 6th to July 4th (see graph, results weighted to 100) the result are very disturbing and certainly align with the Pew Research poll. The greatest intensity of anger shown through people searching “I am angry” is in Idaho, Main, New Mexico, and Kansas in that order. 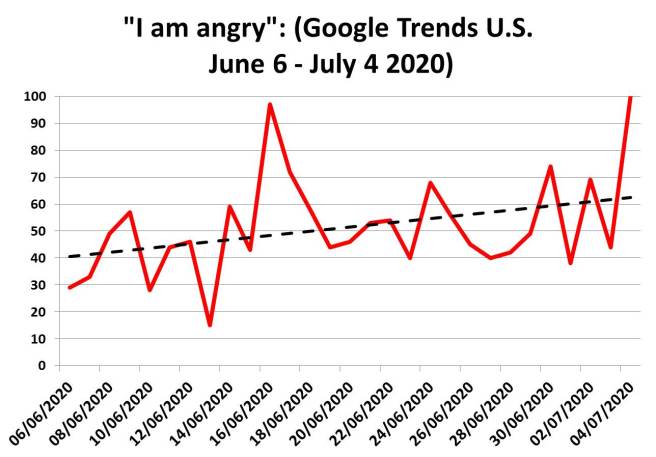 Now let’s check out the public interest in the phrase “free America.” Google Trends again shows us a dramatic upswing from June 6 to July 4th, likely inflamed and accelerated by President Donald Trump.

At Mount Rushmore on the 4th of July President Trump tells supporters that “Make no mistake, this left-wing cultural-revolution is designed to overthrow the American revolution…”There is a new far-left fascism that demands absolute allegiance. If you do not speak its language, perform its rituals, recite its mantras, and follow its commandments then you will be censored, banished, blacklisted, persecuted, and punished. Not gonna happen to us,” he added.”

As with many stream-of-consciousness expressions by Mr. Trump what we have here is the spreading of gasoline over already well-fueled but uncontrolled embers of anger.

In change management it is a very common dynamic to see a sense of personal fear to a situation quickly progress to anger and collective action if the ingredients of focused leadership, emotional communication, and simple solutions are presented. Bad stuff quickly happens when the fearful and angry are provided with what on the surface is disguised as “facts,” “rationalizations,” and a sense that a growing momentum is occurring with legions of similar-minded supporters. Donald Trump, for obvious self-serving political reasons, is fueling fear, anger, and a need for action with the rhetoric of simple and evocative catch-phrases, each acting as a highly-combustible log thrown on the flames of fear, anger, and hate.

Canada is not America but let’s not get too smug. We are only somewhat inoculated from the long-simmering American need for changes to all manner of social safety nets, structures and systems, particularly those applied to health care, social justice, and blatant discrimination.

Google Trends as a diagnostic tool shows us what people are really thinking as they anonymously search for topics and feelings they care about. We might lie in a public opinion poll due to the phenomenon of thinking we should agree with what most others say although the survey is anonymous. But Google Trends exposes our inner core. And what it shows on July 6th is this.

Covid-19 is bringing dramatic change to our lives throughout the world. In change management fear is recognized as a sense of the unknown and a feeling of powerlessness. I argue that both our fears and our lack of power not only here in Canada but everywhere is accelerating. America is showing us what happens when you mix the toxic ingredient Covid-19 to an already long simmering deep and wide cesspool of injustice.

Let’s not get too smug as Canadians.